Interest expenses for the period amounted to $69.74 million, a 29% increase when compared to $54.05 million recorded in the prior year.

Consequently, net interest income for the quarter rose 159% to total $44.94 million up from the $17.34 million recorded in the corresponding period of 2021. EPLY noted, “Net interest income continues to be complemented by the recurring, predictable fees we earn managing or administering assets in our real estate, mezzanine and infrastructure strategies.”

Fees and other operating income for the period under review amounted to $37.41 million versus $10.82 million reported in 2021.

Total comprehensive income for the three months ended March 2022 close​d at $89.78 million, a 76% increase when compared to $50.92 million booked the corresponding period. 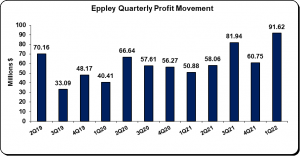