Banks reported, on balance, a continued increase in firms’ demand for loans or drawing of credit lines in the first quarter of 2022. Loan demand was driven by a strong positive impact of financing needs of firms for working capital, reflecting supply chain disruptions as well as precautionary inventories and liquidity holdings. Fixed investment continued to have a positive impact on loan demand, but less than in the previous quarter. In addition, the low general level of interest rates as well as other financing needs, including mergers and acquisitions activity and debt refinancing and restructuring, contributed positively to loan demand from firms. Demand for housing loans and for consumer credit and other lending to households increased further in net terms in the first quarter of 2022. The net increase in housing loan demand was mainly driven by the general level of interest rates. Demand for consumer credit was supported by spending on durable consumption goods and – to a lesser extent – by consumer confidence. For the second quarter of 2022, banks expect a continued net increase in firms’ loan demand, but a net decrease in the demand for housing loans and broadly unchanged demand for consumer credit.

The euro area bank lending survey, which is conducted four times a year, was developed by the Eurosystem in order to improve its understanding of bank lending behavior in the euro area. The results reported in the April 2022 survey relate to changes observed in the first quarter of 2022 and expected changes in the second quarter of 2022, unless otherwise indicated. The April 2022 survey round was conducted between 7 March and 22 March 2022. A total of 151 banks were surveyed in this round, with a response rate of 100%. 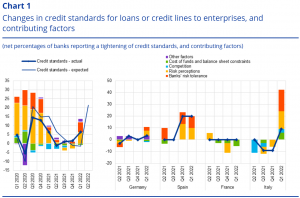 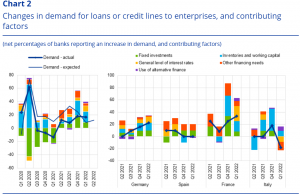