FosRich Company Limited (FOSRICH) for the three months ended March 31, 2020 booked a 19% increase in revenue to total $448.82 million compared to $378.58 million for the same quarter in 2019. The Company noted, “These increases were attributed primarily to increased sales in the Industrial, Control Devices, Panels and PVC categories.”

Other income, for the quarter totalled $6.75 million a contraction of 26% year over year, when compared to the $9.17 million recorded for the previous year’s comparable quarter.

Finance costs of $26.19 million were recorded for the period, a 23% increase when compared to $21.25 million for the corresponding period in 2019. Fosrich noted, “This increase is being driven by a new bond issue, obtained to assist with the financing of operations. This new facility was obtained at more favourable rates than the previous bank or line of credit facilities and has an extended maturity date.”

As at March 31, 2020, total assets amounted to $2.31 billion, up $17% or $343.81 million from the balance of $1.97 billion as at March 31, 2019. The increase in total assets was largely due to ‘Inventories’ and ‘Due from Related Parties’ which totalled $1.20 billion (2019: $949.06 million) and $282.61 million (2019: $96.59 million), respectively. The company note, “The Company continues to closely manage inventory balances and the supply-chain, with a view to ensuring that inventory balances being carried are optimised, relative to the pace of sales, the time between the orders being made and when goods become available for sale, to avoid both overstocking and stock-outs. Monitoring is both at the individual product level and by product categories. Industrial, hardware, panels and electrical lighting were the categories that reflected increases while LED, control devices, solar, wires and lighting were the inventory categories that reflected decreases.” 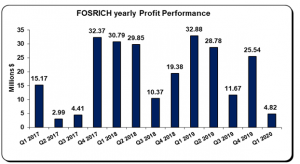