As such, gross profits for the period advanced by 25% and closed out the nine month period at $514.83 million relative to $410.36 million in the prior year’s corresponding period. Fosrich noted that, “These increases were attributed primarily to the greater availability of the products required by the market.”

Administrative and other expenses were $394.10 million, a 25% increase on the $314.10 million posted last year. According to the company, “This was driven by a combination of building out of our human resources expertise as we build capacity for the future, as well as cost associated with the 25th anniversary celebration of the company, the addition of a new Business & Relationship Manager, a new Operations & HR Manager, increased sales commission due to improved sales performance and improvements in staff benefits, increased legal and professional fees, increased selling and marketing costs, increased insurance costs and increased irrecoverable GCT.”

In addition, other income year to date increased to $21.62 million at the end of the nine months ended September 30, 2019 compared to $17.37 million booked for the similar period in 2018. According to management, this “benefitted from commissions earned on JPS streetlighting and other projects, amounting to $16.9 million.”

Fosrich incurred finance costs of $67.16 million, 58% more than the $42.62 million reported for the same period in 2018. The company highlighted, “This increase is being driven by a new bond issue, obtained to assist with the financing of operations. This new facility was obtained at more favourable rates than the previous bank or line of credit facilities.”

Fosrich recorded $1.86 million for taxes compared to nil for the same period in 2018. As such, Net Profit for the nine months ended September 2019 amounted to $73.34 million versus $71.01 million documented a year earlier. Net profit for the quarter amounted to $11.67 million relative to $10.37 million reported for the third quarter of 2018. 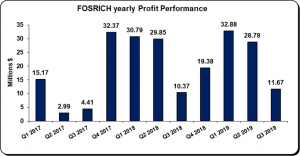