FosRich Company Limited (FOSRICH) for the six months ended June 30, 2021 booked a 28% increase in revenue to total $1.09 billion compared to $857.15 million for the same period in 2020. The Company noted, “These increases were attributed primarily to the greater availability of the products required by the market. While the overall increase in revenues was 28%, the product lines that had significant increases were PVC which saw increases of 105%, hardware 93%, wiring devices 52% and control devices 48%.” Revenue for the quarter closed at $543.80 million compared to $408.33 million for the second quarter ended June 30, 2020.

Other income, year to date totaled $39.86 million an increase of 222% year over year, when compared to the $12.38 million reported twelve months earlier.

Administrative and other expenses rose by 14%, to total $309.77 million (2020: $271.49 million). “The changes was driven primarily by increased staff related costs for salary adjustments, increased sales commission due to improved sales performance and improvements in staff benefits, increased staff training cost with the launch of the new FosRich Corporate University, increased motor vehicle expenses, increased occupancy cost due to the commencement of obligations in January for the second Hayes factory building and increased depreciation charges. There were reductions in legal fees,” the Company noted.

The Company recorded finance cost of $50.78 million for the first six months of the year, a 11% decrease when compared to $57.30 million documented for the corresponding period in 2020. FosRich noted, “This reduction is due to the amortisation of our loan facilities.”

As at June 30, 2021, total assets amounted to $3.24 billion, up 27% from the balance of $2.55 billion as at June 30, 2020. The increase in total assets was largely due to ‘Inventories’ and ‘Right of use assets’ which totaled $1.37 billion (2020: $1.25 billion) and $586.84 million (2020: $195.54 million), respectively. The Company noted, “The company continues to closely manage inventory balances and the supply-chain, with a view to ensuring that inventory balances being carried are optimised, relative to the pace of sales, the time between the orders being made and when goods become available for sale, to avoid both overstocking and stock-outs. Monitoring is done both at the individual product level and by product categories. Sales in most categories remain strong and reflects increases over the prior year. We continue to monitor the effect of the Covid-19 pandemic on our customers buying patterns.” 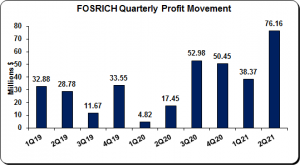