Cost of sales increased by 19% to $902.22 million (2018: 759.23 million). As a result, gross profit increased by 33% to $709.95 million compared to $534 million in 2018. Gross profit for the quarter amounted to $195.12 million (2018: $123.64 million). The company reported that, “These increases were attributed primarily to the greater availability of the products required by the market. Other income for the year benefitted from favourable foreign exchange gains amounting to $18 million and interest income totalling $13 million.”

Other income totalled $51.98 million for the period relative to the previous year’s gain of $47.41 million.

Total expenses increased by 35% to $660.27 million (2018: $490.29 million). Of this, administrative and other expenses increased to $560.57 million (2018: $422.79 million). FOSRICH reported that this was due to, “there were increases in staff related costs associated with our commencement of PVC manufacturing, local travel associated with increased activity, legal and professional fees and rent. Decreases were driven primarily by efficiencies gained from reduced staff training, computer expenses, foreign travel, bank charges and reductions in damaged goods write-off and warranty expenses.” While finance costs expenses recorded an increase of 48%, closing at $99.69 million (2018: $67.50 million). The movement according to FOSRICH was, “driven by increased financing obtained to assist with the financing of operations. This new financing was obtained at more favourable rates than the previous bank facilities.” Total expenses for the quarter amounted to $199.01 million compared to $133.57 million for the previous period.

The company, as at December 31, 2019, recorded total assets of $2.24 million, an increase of 9.19% when compared to $2.05 million recorded last year. The increase was mainly attributed to inventories and due from related party which closed at $1.17 billion (2018: $1.02 billion) and $282.61 million (2018: nil). Management noted, “The company continues to closely manage inventory balances and the supply-chain, with a view to ensuring that inventory balances being carried are optimised, relative to the pace of sales, the time between the orders being made and when goods become available for sale, to avoid both overstocking and stock-outs. Monitoring is both at the individual product level and by product categories. All our locations reflected increases in inventory values across all inventory categories.” 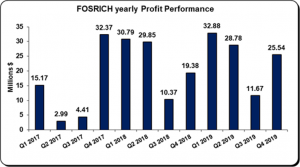