Administrative expenses climbed by 27% for the period, to total $943.83 million versus $741.81 million in 2019, while selling and promotion closed the nine months at $79.39 million (2019: $52.54 million). FTNA stated, “The increase in operating expenses for the quarter of 32% over the prior year was largely due to the addition of a new location to our footprint. Our flagship Waterloo Square location’s expenses were $79.7 million of the total increase of $84.6 million.”

This resulted in profit before taxation totalling $234.64 million compared to $244.48 million recorded last year, an 4% year over year reduction. For the quarter profit before taxation moved from $29.78 million in 2019 to $21.59 million in 2020. Management stated that, “The decline of 27% in profit before tax, over corresponding period last year, was due to a $26.4 million unrealized loss in the value of our short-term unit trust investment this quarter. This dip in value is in keeping with the decline in financial markets locally and globally.”

There were no income taxes for the period under review, while $39.81 million was booked for the comparable period in 2019. As such, net profit increased by 15% to close the period under review at $234.64 million relative to $204.67 million recorded the prior corresponding period. Net profit for the quarter amounted to $21.59 million, a 27% decline compared to $29.78 million booked for the prior quarter of 2019.

Management indicated, “Fontana has been significantly impacted by the ongoing Covid-19 pandemic. As we adhere to the government protocols that have been implemented, the restrictions on opening hours and the corresponding effect on consumer behaviour affected our overall business in the second half of March 2020. As an essential service, Fontana has been fortunate to be able to support the economy and our customers by continuing to operate during this difficult period. The combination of restricted hours imposed by ongoing curfews and the drastic decline in economic activity has resulted in a decline in consumer purchasing power.”

As at March 31, 2020, total assets amounted to $3.21 billion, up $1.38 billion from $1.83 billion as at the previous year. The increase in total assets was as a result of the increase in ‘Right of use Assets’ and ‘Property, plant and equipment’ which closed the period with $862.92 million (2019: nil) and $776.89 million (2019: $236.54 million), respectively. Fontana Limited highlighted that, “This was due primarily to the increase in fixed assets for the new Waterloo store, as well as the impact of IFRS 16 where the value and liability associated with right of use leased properties are now recognized on the balance sheet.” 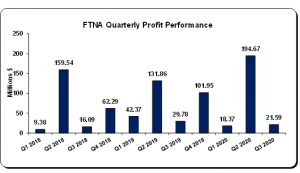