Administrative expenses climbed by 14% for the period, to total $330.59 million versus $289 million in 2020, while selling and promotion closed the three months at $12.61 million (2020: $13.17 million). FTNA noted, “Staff costs were the driving factor for the increase, as Fontana employees were given an interim bonus in recognition of their unwavering dedication and service. This was a well-deserved reward in light of their resounding efforts to deliver Fontana’s best ever results for the year ended June 30, 2021.”

Finance and policy cost for the three months totalled $51.77 million, a 16% contraction when compared to the $61.31 million recorded for the same quarter in 2020, while other income amounted to $14.79 million relative to $13.78 million the prior year.

This resulted in profit before taxation totalling $61.13 million compared to $45.21 million recorded last year, a 35% increase year over year.

There was no income tax for the period as such net profit rose by 35% to end the period at $61.13 million relative to $45.21 million recorded for the prior year’s corresponding quarter.

Management noted “These strong results were achieved during a period which saw several factors impacting our operations. The government imposed Covid-19 protocol of fourteen lockdown days, with limited opening of two branches for the dispensary only, continuing online schooling which limited demand for back-to-school supplies in the strongest quarter for this activity, ongoing negative impacts on the tourism industry, and reduced hours of operation under general curfew guidelines. Despite this Fontana continues to exceed expectations and maintain high service standards for customers.” 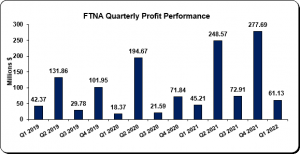