Cost of Sales for the period increased 22% to closed at $1.05 billion, up from $865.25 million reported the prior comparable period.

As such, gross profit for the three months amounted to $558.79 million, a 33% uptick when compared to $441.3 million recorded last three months. Fontana noted, “Our gross profit margin was 35.8% compared to 33.8% last year, as we continue to recover from the pandemic-related challenges and benefit from improved international freight rates. We also saw a shift in the sales mix, with better growth from higher margin items such as stationery, during our best back-to-school sales season since the start of the pandemic.”

Fontana’s administrative expenses rose by 28% for the period, to total $424.1 million versus $330.6 million in 2021, while selling and promotion closed the three months at $40.18 million (2021: $12.61 million). Management explained “Staff costs were the main driver, as our operating hours returned to their pre-pandemic norms – which required additional man-hours. In addition, we increased our staffing with the opening of our new warehouse facility. In preparation for our new state-of-the-art Point of Sales system, we encouraged customers to redeem their loyalty points through increased advertising and promotions. Despite this, our operating profit increased by 26.9% to $124.5 million this quarter.”

Finance cost totalled $54.23 million, an increase of 5% when compared to the $51.77 million recorded for the same period last year. FTNA stated, “This was impacted primarily by the loan interest associated with the bond issued in December 2021.”

The company incurred no taxation charge for the period (2021: nil). 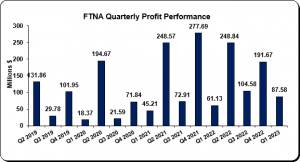