Administrative expenses climbed by 5% for the period, to total $289 million versus $276.55 million in 2019, while selling and promotion closed the three months at $20.76 million (2019: $19.68 million). FTNA noted, “The minimal increase in operating expenses for the quarter of 5% over the prior year, was achieved through our concerted efforts to contain costs and improve efficiencies, while we adjusted our spending mindset in reaction to the changed circumstances brought about by the pandemic.”

As such operating profit saw a 322% increase to $85.16 million relative to $20.18 million booked a year ago. The Company stated, “We continue to benefit from economies of scale with the addition of the Waterloo Square location whose expenses were the major contributing factor to the increases recorded.”

Finance and policy cost for the three months totalled $51.41 million, an increase of 262% when compared to the $14.22 million recorded for the same quarter in 2019, while other income amounted to $11.46 million relative to $12.41 million the prior year. It was noted that, “Finance costs were impacted primarily by the foreign exchange losses recorded in relation to the revaluation of the lease liability (IFRS 16) accounting for $22.8 million of the overall loss.”

This resulted in profit before taxation totalling $45.21 million compared to $18.37 million recorded last year, a 146% increase year over year.

There was no income tax for the period as such net profit rose by 146% to end the period at $45.21 million relative to $18.37 million recorded for the prior year’s corresponding quarter.

In commenting on the performance, CEO Anne Chang said “Despite the impact of COVID-19 and reduced operating hours, we saw increases in prescription sales, transaction volumes and average basket sizes. We continue to be encouraged by the growth in new customers, which is driven by our new Waterloo Square location as well as the strength of our brand.” 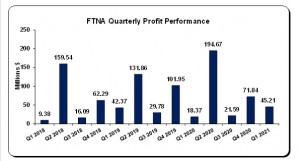