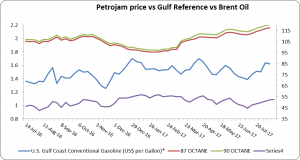 Gasoline production by U.S. refiners and blenders is running near record levels over the first seven months of 2017, with four-week rolling average production well above its five-year average and close to the top of its five-year range. Despite growing domestic and foreign demand leading to draws from gasoline stocks over the past seven consecutive weeks, gasoline inventories also continue to remain above their five-year average levels.

Growth in U.S. gasoline production since March is the result of record-high refinery runs. For the week ending April 21, U.S. refinery runs exceeded 17.5 million barrels per day (b/d) for the first time since EIA began publishing the weekly data series in 1990. Refinery runs have since exceeded this threshold six additional times, reaching an all-time high of 17.8 million b/d the week ending on July 28.