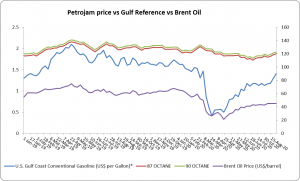 On August 24, 2020, it was noted that, “The U.S. average regular gasoline retail price increased by nearly 2 cents from the previous week to $2.18 per gallon on August 24, 39 cents lower than the same time last year.” The West Coast and Midwest prices each experienced increases of more than 2 cents to $2.86 per gallon and $2.07 per gallon, respectively. The Gulf Coast price rose almost 2 cents to $1.87 cents per gallon, the East Coast climbed 1 cent to $2.10 per gallon, and the Rocky Mountain price rose close to 1 cent to $2.35 per gallon.