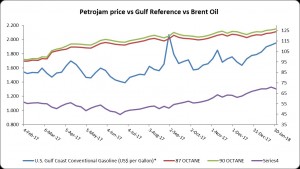 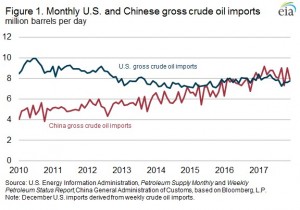 In 2017, an average of 56% of China’s crude oil imports came from countries within the Organization of the Petroleum Exporting Countries (OPEC). The share of Chinese crude oil imports from OPEC countries declined from a peak of 67% in 2012, while Russia and Brazil increased their market share of Chinese imports more than any other country, from 9% to 14% and from 2% to 5%, respectively (Figure 2). Imports from Russia, which passed Saudi Arabia as China’s largest source of foreign crude oil in 2016, totaled 1.2 million b/d in 2017, while Saudi Arabia accounted for 1.0 million b/d. OPEC countries and some non-OPEC countries, including Russia, agreed to reduce crude oil production through the end of 2018, which may have allowed other countries to increase their market share in China in 2017.