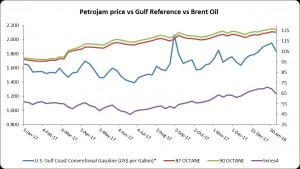 EIA’s February Short-Term Energy Outlook (STEO) raises forecast crude oil prices in 2018 by nearly $3 per barrel (b) compared with the previous STEO. Average monthly Brent prices have increased for seven consecutive months, and, on January 11, spot prices moved higher than $70/b for the first time since December 2014. EIA forecasts Brent spot prices will average about $62/b in both 2018 and 2019, compared with an average of $54/b in 2017. EIA expects West Texas Intermediate (WTI) crude oil prices to average $4/b lower than Brent prices in both 2018 and 2019 (Figure 1). The upward revision to 2018 prices results in higher U.S. crude oil production throughout the forecast. However, with relatively little production growth from members of the Organization of the Petroleum Exporting Countries (OPEC) and higher global consumption, the global oil balances remain largely unchanged from the forecast last month.

Crude oil prices have increased over the past seven months as oil inventories, both in the United States and globally, have fallen steadily. In January, oil prices may have received some support following the OPEC monitoring committee meeting, where some oil ministers suggested extending the production cut agreement in some form beyond the currently scheduled expiration at the end of 2018.Rapid declines in Venezuelan crude oil output are also likely contributing to higher crude oil prices. Average U.S. imports of crude oil from Venezuela declined to less than 0.4 million barrels per day (b/d) for the four weeks ending January 26, approaching the lowest level in decades.