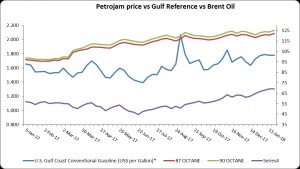 Pipeline constraints have probably resulted in Western Canada Select (WCS) crude oil prices trading at their lowest levels compared with West Texas Intermediate (WTI) prices in nearly three and a half years. The constraints have likely contributed to the increase in crude oil shipments by rail, a more expensive form of transportation that is ultimately reflected in the WCS–WTI price spread. Reduced pipeline flows from Canada could also be a factor in the recent reduction in crude oil stocks in Cushing, Oklahoma, which declined by 22 million barrels (34%) since the beginning of November and were 17% below their five-year average as of January 12, 2018.

The crude oil spot price difference between WCS and WTI reached -$26.78 per barrel (b) on December 20, 2017, the largest difference since July 25, 2014, and settled at -$23.80/b on January 17, 2018 (Figure 1). Trade press reports and weekly rail traffic indicators from the Association of American Railroads suggest that U.S. imports of crude oil from Canada by rail increased in recent weeks. 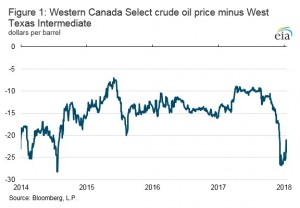 On November 16, 2017, TransCanada shut down the 590,000 barrels per day (b/d) Keystone Pipeline for 11 days because of a leak in South Dakota. The Keystone Pipeline transports Canadian crude oil from Hardisty, Alberta, to Cushing. Because of pressure restrictions, when the pipeline restarted on November 28, it was only allowed to operate at approximately 80% of full capacity before being slowly restored to full service.