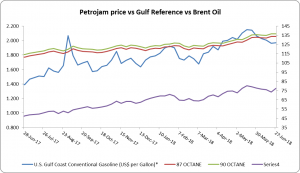 For the period 2017 to 2018, U.S. refinery capacity remained relatively unchanged

“Annual operable crude oil distillation unit (CDU) capacity had increased each of the five years before 2018 and has remained greater than 18 million b/cd since January 1, 2016. The capacities of secondary units that support heavy crude oil processing and production of ultra-low sulfur diesel and gasoline, including thermal cracking (coking), catalytic hydrocracking, and hydrotreating/desulfurization, increased slightly from year-ago levels. These downstream capacity increases are primarily the result of debottlenecking–when refineries increase the throughput of existing infrastructure–rather than large new builds.”