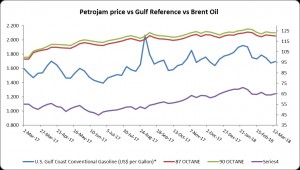 The production of  US crude oil increased 5% in the last year, amounting to 10 million barrels per day in the last two months of the year. U.S. crude oil production grew on average by 463,000 barrels per day (b/d) in 2017 to 9.3 million b/d annually after declining by 551,000 b/d in 2016. US crude oil reached its highest of 1.2 million b/d year-over-year November 2017 in U.S. history, surpassing 10 million b/d, a level last reached in 1970. There has been significant growth in the crude oil industry for the last decade, primarily deiven by the production from tight rock formations using horizontal drilling and hydraulic fracturing. “ It is projected by the EIA that U.S. crude oil production will continue growing in 2018 and 2019, averaging 10.7 million b/d and 11.3 million b/d, respectively.”

“Texas continues to be the largest crude oil-producing state in 2017, averaging 3.5 million b/d. Texas also grew annual production more than all other states and the Federal Offshore Gulf of Mexico (GOM) in 2017, growing by 298,000 b/d. Significant growth occurred in several productive plays within the Permian region in Texas. Growth in the Permian also drove New Mexico to the second-largest growth rate in 2017 with a 74,000 b/d increase.”

“New Mexico has become the the third-largest crude oil-producing state in the second half of 2017 ahead of California and Alaska despite the fact that it produced less on an annual average basis. The new projects and expansions which commenced two years ago in Gulf of Mexico hiked the production in 2017, along with two other projects that began in 2017 contributed to 51,000 b/d of annual growth. Production levels in Colorado, Oklahoma, and North Dakota each grew by more than 30,000 b/d from 2016 to 2017, while Alaskan production increased only slightly. California’s production declined 34,000 b/d, the state’s third consecutive annual decline.”