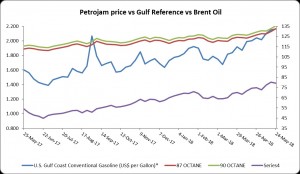 “Normal gas prices have averaged $2.92 per gallon (gal) nationally on May 21, an increase from the prior year’s price of $2.40/gal before the holiday weekend. This has been the highest price ahead of the holidays since 2014’s $3.67/gal. Relatively greater crude oil spot prices, strong gasoline demand, and declining gasoline inventories are all factors influencing the climb in higher gasoline prices.”

“EIA predicts that gasoline prices will be more this summer compared to last summer mainly because EIA expects Brent crude oil prices to average $22 per barrel (b) higher than during last summer.  U.S. gasoline prices have been more closely tied to Brent crude oil prices than to West Texas Intermediate prices. The Brent price grew significantly in 2018, averaging $78.17/b the week of May 18, 2018, which is a year-over-year $26.41/b (51%) increase from the same week of last year. Because gasoline taxes and retail distribution costs have been generally stable, movements in gasoline and diesel prices have been mainly the result of changes in crude oil prices, wholesale margins, and inventories.”