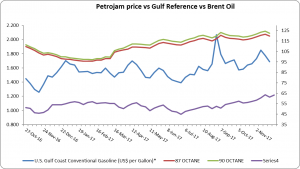 The weekly average U.S. gasoline price heading into the 2017 Thanksgiving holiday is $2.57 per gallon (gal), 41 cents/gal higher than it was the week before Thanksgiving last year and 47 cents/gal higher than at the same time in 2015. However, gasoline prices are more than 19 cents/gal lower than the previous five-year average for the same date (Figure 1). Although refinery operations have recovered after hurricane outages, higher crude oil prices, tighter inventories, and stronger demand (measured as product supplied) have all contributed to higher current gasoline prices. The spot price for Brent crude oil, the primary driver of U.S. gasoline prices, averaged $62 per barrel (b) the week of November 17, an increase of $18/b and $20/b compared with the week prior to Thanksgiving in 2016 and 2015, respectively. U.S. product supplied increased 571,000 barrels per day (b/d) from last year to 9.6 million b/d as of November 17. The strong demand, however, has been met with increasing gross inputs to refineries, which were 16.7 million b/d as of November 17 (based on four-week moving averages), higher than the previous five-year maximum for this time of year. Despite the post-hurricane recovery in refinery runs, ending stocks of total gasoline in the United States as of November 17 were down nearly 13.6 million barrels compared with the same time last year, putting upward pressure on gasoline prices.