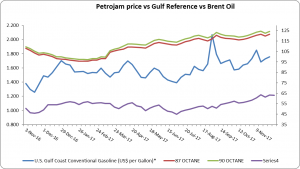 Despite record high gasoline consumption, the United States is on pace to export more gasoline than it imports for the second year in a row. Changes in regional markets, increased demand for exports, and high refinery runs are once again leading to the United States to be a net exporter in 2017.

U.S. gasoline imports and exports are highly seasonal. The United States has typically been a net importer of gasoline in spring and summer months, when domestic consumption increases, and a net exporter in winter months, when demand is lower. However, for every month between April and August 2017, the United States set either record low net imports or record high net exports (Figure 1). Almost year-round net gasoline exports is a major change for U.S. gasoline markets, which is the result of one long-term trend and two more recent trends.