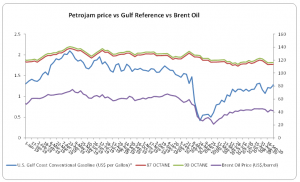 On September 28, 2020, it was noted that, “The U.S. average regular gasoline retail price increased less than 1 cent, remaining virtually unchanged at $2.17 per gallon on September 28, 47 cents lower than the same time last year.” The East Coast price declined almost by 1 cent but remained unchanged at $2.11 per gallon, also, the Gulf Coast price declined by under 1 cent but remained at $1.84 per gallon as at last week. The Midwest price increased almost by 3 cents to $2.06 per gallon. However, the Rocky Mountain and West Cost price each decreased almost by 2 cents to $2.30 per gallon and to $2.82 per gallon, respectively.