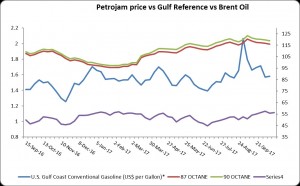 In its Short-Term Energy Outlook (STEO) update released this week, EIA forecasts that U.S crude oil production will average 9.4 million barrels per day (b/d) in the second half of 2017, 340,000 b/d more than in the first half of 2017.

Extending across western Texas and southeastern New Mexico, the Permian region has developed into one of the more active drilling regions in the United States because its large geographic size and favorable geology contain many prolific tight formations such as the Wolfcamp, Spraberry, and Bonespring. Increases in proppant intensity, lateral lengths, and changes to slick-water completions are also among the factors that have allowed the Permian to remain one of the most economic regions for oil production despite the low-oil-price environment. WTI spot prices averaged $50/b in the first half of 2017, spurring deployment of more rigs to the Permian, which rose steadily from 276 rigs in January to 380 rigs in September. The STEO projects that the Permian region rig count will continue to grow from an average of 341 rigs in 2017 to 371 rigs in 2018, and the WTI price is forecast to average $49/b for the second half of 2017 and $51/b in 2018.