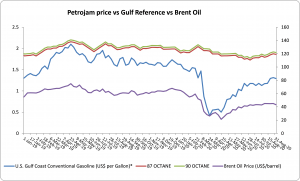 The average diesel fuel price in the U.S. rose close to 2 cents from $2.43 per gallon as at last week, and 54 cents lower when compared to the same period last year. The U.S. average diesel fuel price increased nearly 2 cents from the previous week at $2.44 per gallon on August 31, 54 cents lower than a year ago. The Midwest price experienced an increase of over  2 cents to $2.33 per gallon, the Rocky Mountain price rose close to 2 cents to $2.39 per gallon. Moreover, the Gulf Coast, East Coast, and West Coast prices each experienced increases of more than 1 cent to $2.19 per gallon, $2.52 per gallon, and $2.97 per gallon, respectively.