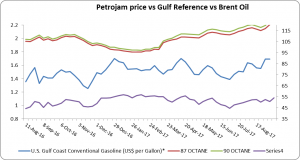 Hurricane Harvey, which first made landfall on August 25, 2017, has created considerable uncertainty for gasoline supply and prices, as the area affected by the hurricane is home to much of the nation’s petroleum infrastructure. On August 28, the U.S. average retail gasoline price was $2.40 per gallon (gal), the second-lowest price on the Monday before Labor Day since 2004. However, prices on that date do not yet reflect the full effects of Hurricane Harvey.

However, Hurricane Harvey, which hit the Gulf Coast last Friday, has affected crude oil production and refinery operations in the region. A number of refineries have shut down or are operating at reduced rates, which will likely have implications beyond the Gulf Coast. The East Coast in particular is largely dependent on pipeline shipments of transportation fuels from the Gulf Coast.

The Colonial pipeline, a major pipeline supplying petroleum products from the Gulf Coast to the East Coast, is usually fully utilized but is now operating intermittently because of a lack of refinery and terminal product available to fill the line. Several challenges still remain in quickly restarting refineries, including loss of electricity, the ability of personnel to reach the refineries, and the capacity to gather and distribute crude oil and petroleum products.