According to the Statistical Institute of Jamaica (STATIN), the total value added in the first quarter of 2021 declined by 6.7 per cent when compared to the similar quarter of 2020. This performance was a reflection of the continued impact of the novel Coronavirus (COVID-19) and the measures adopted to contain its spread. The impact was predominantly felt in the Services Industries which fell by 9.9 per cent. However, the Goods Producing Industries expanded by 2.6 per cent. 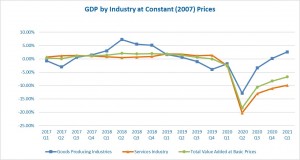 Decline in the Hotels & Restaurants industry resulted from a fall in hotels & other short-stay accommodation and restaurants, bars & canteens. This industry continued to be negatively impacted by the downturn in the global travel industry. The hotels & other short stay accommodation group was impacted by a 73.3 per cent decrease in foreign national arrivals.

The contraction in the Transport, Storage & Communication industry was influenced by a fall in the transport sub-industry. There was reduced demand for transportation services resulting from the partial closure of schools and the continued work-from home order implemented by the Government to curtail the spread of COVID-19.

The Wholesale & Retail Trade; Repairs; Installation of Machinery & Equipment industry was negatively impacted by lower output levels in the Manufacturing and Agriculture industries. There was also a reduction in consumer demand due to lower levels of employment and the reduction in shopping hours which were implemented to limit the spread of COVID-19.

The Finance & Insurance Services industry saw declines in the sub-industries monetary intermediation and other financial intermediation. The decline was tempered by a growth in insurance services. The performance of monetary intermediation was mainly influenced by a decrease in commercial banks. Commercial bank activities were impacted by lower income from fees and commissions largely due to reduced volume of transactions in branch. Lower transaction volumes resulted mainly from measures implemented to limit the spread of COVID-19, including the use of digital platforms. The growth in insurance services was largely due to improved performance in life insurance activities.

Within the Goods Producing Industries higher output levels were recorded in Construction (10.5%) and Mining & Quarrying (7.1%). Growth in the Construction industry for the review period was largely due to building construction which was primarily influenced by an increase in residential construction. While growth in the Mining & Quarrying industry primarily attributed to increased output levels for crude bauxite and alumina. Alumina production grew by 4.5 per cent to 402.7 thousand tonnes in 2021, moving from 385.3 thousand tonnes in 2020. The rise in alumina was due to increased production from the JAMALCO plant. The increase in crude bauxite production was reflected in exports of crude bauxite which increased by 6.3 per cent to 638.6 thousand tonnes in 2021. However, the volume of alumina exported declined for the review period.

However, there were declines in Agriculture, Forestry & Fishing (2.0%) and Manufacturing (1.1%). This was as a result of declines in the sub-industries, Other Agricultural Crops, which includes Animal Farming, Forestry & Fishing and Traditional Export Crops of 2.1 per cent and 1.4 per cent, respectively. The industry’s performance was impacted by dry conditions in some of the major producing areas, coupled with damages sustained to farmlands due to heavy rainfall which occurred in the October to December quarter of 2020.