According to the Statistical Institute of Jamaica (STATIN), the Jamaican economy declined by 8.3% in the fourth quarter of 2020 when compared to the similar quarter of 2019. This downward movement resulted from the 11.1% decline in the Services Industries, while the Goods Producing Industries grew by 0.2%. The performance of the economy continued to be negatively impacted by the spread of the novel Coronavirus (COVID-19) and the measures adopted island wide to limit its spread. Such measures included the closure of schools, impositions of curfews, prohibition of activities in places of amusement and bars, the cancellation of entertainment events as well as the facilitation of work from home by some organizations. 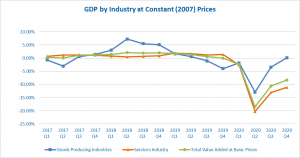 The performance was more pronounced in the Hotels & Restaurants, Wholesale & Retail Trade; Repairs; Installation of Machinery & Equipment, Other Services and Transport, Storage and Communication industries. There was a 72.0% decline in stopover arrivals to the island and there were no cruise passenger arrivals for the period under review, However, improved performance was recorded for betting & gaming activities.

Within the Goods Producing Industries, the Agriculture, Forestry & Fishing and Manufacturing industries declined by 7.2% and 0.4% respectively. However, higher levels of output were achieved in Construction (6.3%) and Mining & Quarrying (6.3%).

Decreased output of 4.7% and 6.3% from the Food, Beverages & Tobacco and the Other Manufacturing sub-industries contributed to the 5.4% decline in the Manufacturing industry. Lower levels of output in the Mining & Quarrying industry were largely attributed to the continued impact from the suspension of production in September 2019 at the Jiuquan Iron and Steel Company (JISCO) Alpart refinery.

According to STATIN, “The Jamaican economy grew by 0.9% when compared to the third quarter of 2020, influenced by the relaxation in some of the measures instituted since March to limit the spread of COVID-19.” The main contributing factor was the 1.6% increase in the Services Industries.