Gross domestic product improved 0.6% in both the euro area (EU19) and the EU28 for the third quarter of 2017 according to an estimated released by Eurostat, the statistical office of the European Union. the growth follows a 0.7% increase recorded for the second quarter of 2017 in both areas. 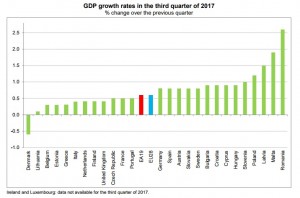