‘Banking & Investments’ climbed 7% year over year to total $3.28 billion (2020: $3.06 billion). The Group mentioned that, “The Financial Group continued expansion of its GKONE network in Jamaica which now has 17 locations, including a new store in Clock Tower Plaza, Kingston. GKFG also unveiled its new branding in the second quarter of 2021, launching a new logo, website, and its Living A Graceful Life campaign, which reflects everyday financial optimism.”

Revenue from ‘Insurance’ amounted to $5.61 billion, a year over year increase of 23% over last year’s corresponding period of $4.55 billion. Management highlighted that, “GKGI’s motor portfolio experienced steady growth, driven by the combination of new and revamped products, such as GKI Family Connect which was launched in the second quarter of 2021. GKGI continues to expand through innovation, partner relationship management, and targeting of untapped segments. Key Insurance demonstrated improvement in performance year to date over prior year and continues to execute on its strategic objectives on the path towards sustainable profitability. Allied Insurance Brokers (AIB) exceeded core revenue over the corresponding quarter in 2020. AIB remains focused on leveraging international broker relationships, which has yielded new accounts and proven critical in maneuvering constricted markets. Canopy Insurance continues to realise growth driven by its group health product, with gross premiums for the first half of 2021 significantly exceeding the corresponding period in 2020.”

‘Money Services’ brought in $4.83 billion, 18% greater than the $4.09 billion reported in June 2020. GK noted that, “The business continues to innovate and grow its digital offerings, with Electronic Registration and Direct to Bank (D2B) services now available in three markets: Jamaica, Guyana and Trinidad. Customer registration for digital services in Jamaica in the first half of 2021 has exceeded the corresponding period of the prior year by 16%, reflecting the increased adoption of direct to bank transactions. GKMS’ bill payment business exceeded pre-tax profits over the same period of 2020. Bill Express Online continues to show strong performance in Jamaica, with a 26% increase in transactions recorded over the corresponding period of the prior year, and the service has also been introduced to the Trinidad market. GraceKennedy Remittance Services (GKRS) remains the market leader for the region and continues to record growth year over year in all territories.”

Interest income from non-financial services grew 24% to total $276.09 million compared to $223.46 million reported in the prior year’s corresponding period. Interest expenses from non-financial services amounted to $557.85 million versus $553.44 million a year earlier, a 1% increase. Additionally, share of results of associated companies rose by 15% amounting to $329.58 million, versus $286.93 million reported for June 2020.

GK noted that, “GK’s Digital Transformation strategy is now fully operational and is being implemented across the Group with the support of our in-house Digital Factory team. Two financial service digital products are in the final stages of market readiness, with a six-week soft launch of the products for GK team members getting underway on July 6. Hi-Lo Food Stores, GK’s supermarket chain in Jamaica, is also preparing to launch its e-commerce website in August.”

In addition, Management stated, “GK’s acquisition of Scotia Insurance Eastern Caribbean Limited (SIECL), a licensed life insurance company operating in the Eastern Caribbean, is in its final stages. The required regulatory approvals have been received, and the deal is expected to close by the end of July. SIECL is GK’s second acquisition since the start of the year, the first being the purchase of the 876 Spring Water brand in March. GK’s M&A Unit continues to actively pursue several prospects which it has in the pipeline.” 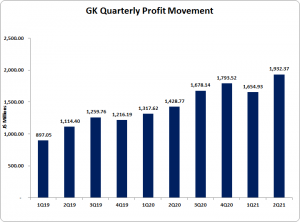