As a result of the increase in revenues and grants for the period April to December 2017, the ‘Fiscal Surplus’ was $2.54 billion, relative to a projected deficit of $22.62 billion. Additionally, the primary balance for the period amounted to $97.76 billion, 29.9% more than budgeted. 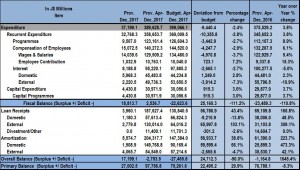 As part of the Memorandum of Economic and Financial Policies (MEFP), the GOJ estimates that the primary balance, as a performance criterion, should amount to $132.3 billion by the end of the 2017/2018 fiscal year.  For the December quarter, a primary balance of $59.0 billion is estimated. As at the end of December 2017, this amounted to $97.76 billion.  Tax Revenue was expected to total an estimated $328.0 billion by the end of the December quarter. The reported tax revenue for the end of December 2017, was t $353.06 billion.