As a result of the decreases in expenditures for the period April to February 2018, the ‘Fiscal Deficit’ was $8.61 billion, relative to a projected deficit of $34.87 billion. Additionally, the primary balance for the period amounted to $116.78 billion, 22.2% more than budgeted. 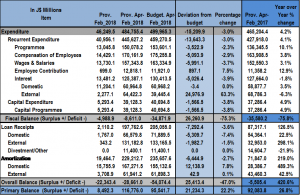