For the period of April to December 2019, the GOJ reported Total Revenues & Grants of $519.01 billion, $2.17 billion more than the Government’s projection. Furthermore, year over year, this represents an increase of approximately 18.7% relative to the $437.30 billion recorded for the corresponding period in 2018. ‘Tax Revenue’, ‘Capital Revenues’ and ‘Grants’ outperformed projections during the review period, while ‘Non-Tax Revenue’ underperformed projections during the period. ‘Tax Revenue’ amounted to $461.69 billion, $2.21 billion more than budgeted while ‘Capital Revenue’ of $832.9 million was reported; $6.60 million more than budgeted. Furthermore, ‘Grants’ totalled $4.28 billion, $102.30 million or 2.4% more than budgeted. ‘Non-Tax Revenue’ underperformed the budget by $154.50 million, amounting to $52.20 billion during the review period. Notably, no provisional amount was booked for ‘Bauxite Levy’ for the review period.

As a result of the decrease in Expenditures for the period April to December 2019, the ‘Fiscal Surplus’ was $12.27 billion, relative to a projected surplus of $4.88 billion. Additionally, the primary balance for the period amounted to $117.92 billion, 4.7% more than budgeted. 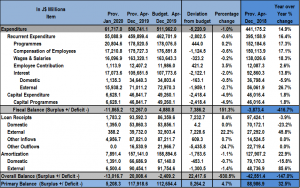 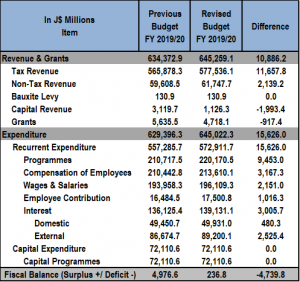 “The Second Supplementary Estimates FY 2018/2019 was tabled in Parliament on January 21, 2020 and reflected total Central Government expenditure of $859,071.6mn, an increase of $7,966.7mn above the First Supplementary Estimates. The increase in expenditure is entirely on the recurrent side, with Programmes increasing by $5,815.5mn and Compensation by $2,151.2mn. Higher than programmed revenue yields supported the increased expenditure.”

For Financial Year 2019/20, further adjustments made in the Second Supplementary Estimates to the Estimates of Expenditure were as a result of:

Included in the additional expenditure are the following:

Of note, some projects under the Works portfolio of the MEGJC that are able to execute above the programmed amounts under the First Supplementary Estimate have been provided with additional allocations:

The FY 2019/20 budget also includes Other Outflows towards:

The Government highlighted that, “Other Inflows, including flows from the PCDF, have more than tripled year-over-year reflecting the integration of the Fund into the Central Government. As a result of the increase in Other Inflows, estimated loan receipts for FY 2019/20 are lower than that of last fiscal year. Amortization payments are estimated at 34.2% over the last fiscal year partly on account of higher year-over-year maturities, with some contribution from depreciation of the Jamaica dollar.”