For the period of April 2021 to January 2022, the GOJ reported Total Revenues & Grants of $549.70 billion, $4.23 billion less than the Government’s projection. This represented an increase of approximately 24% relative to the $443.37 billion recorded for the corresponding period in 2021. ‘Non-Tax Revenue’ and ‘Grants’ underperformed projections during the review period. ‘Non-Tax Revenue’ amounted to $72.08 billion during the review period, while ‘Grants’ closed the period at $6.40 billion, $312.7 million less than the budgeted amount. ‘Tax Revenue’ outperformed the budget to end at $468.05 billion, $354.2 million more than budgeted. ‘Capital Revenue’ of $908.40 million was reported which was 3.7% higher than the budgeted amount. Notably ‘Bauxite Levy’ amounted to $2.26 billion, $102.4 million more than the budgeted amount. 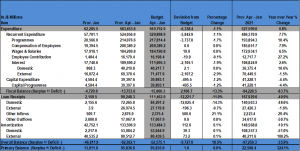