For the period of April to July 2020, the GOJ reported Total Revenues & Grants of $161.75 billion, $9.61 billion more than the Government’s projection. Furthermore, year over year, this represents an increase of approximately 5.1% relative to the $153.85 billion recorded for the corresponding period in 2019. ‘Tax Revenue’, ‘Non-Tax Revenue’ outperformed projections during the review period, while ‘Grants’ underperformed projections during the period. ‘Tax Revenue’ amounted to $143.92 billion, $10.04 billion more than budgeted while ‘Non-tax Revenue’ of $17 billion was reported, $394 million more than budgeted. ‘Grants’ underperformed the budget by $834.40 million, amounting to $806.90 million during the review period. Notably, no budgeted amount was booked for ‘Capital Revenue’; however, the provisional amount closed the period at $10.60 million. Additionally, no provisional amount was booked for ‘Bauxite Levy’ for the review period.

As a result of the increase in Expenditures for the period April to July 2020, the ‘Fiscal Deficit’ was $50.91 billion, relative to a ‘Projected Deficit’ of $59.59 billion. Additionally, the primary deficit balance for the period amounted to $10.77 billion, 39.7% less than budgeted. 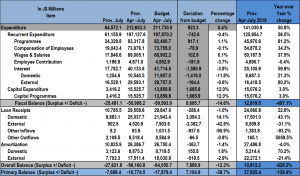