The categories below the budgeted amount included ‘Programmes’ which amounted to $65.71 billion which was $399.4 million or 0.6% less than budgeted. Similarly, ‘Employee Contribution’ totalled $4.54 billion, which was $470.30 million below the budgeted amount of $5.01 billion. ‘Compensation of Employees’ totalled $67.20 billion, 0.6% less than budgeted. 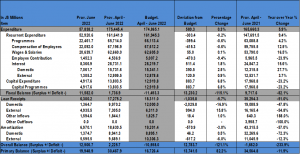