As a result of the decrease in Expenditures for the period April 2018-March 2019, the ‘Fiscal Surplus’ was $24.39 billion, relative to a projected surplus of $9.62 billion. Additionally, the primary balance for the period amounted to $153.58 billion, 5.3% more than budgeted. 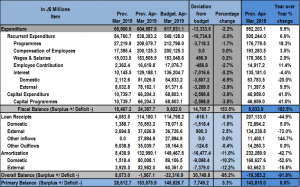 As part of the Memorandum of Economic and Financial Policies (MEFP), the GOJ estimates that the primary balance, as a performance criterion, should amount to $142.14 billion by the end of the 2018/2019 fiscal year. However, as at the end of March 2019, this amounted to $153.58 billion which indicated that the Government surpassed its target. Tax Revenue was expected to total an estimated $537.47 billion by the end of the March quarter. Alternatively, the reported tax revenue for the end of March 2019 was $542.92 billion, $5.4 billion above target.

“The Third Supplementary Estimates FY 2018/2019 was tabled in Parliament on March 20, 2019 and reflects total Government Expenditure of $802.6 billion. The Third Supplementary Estimates represent a reallocation of programmed expenditure from areas where provisions have been made and those monies have not yet been spent, with five days to go before the 2018/19 fiscal year ends,” as stated by Jamaica Information Service (JIS).

“The Minister indicated that while maintaining the expected expenditure out-turn for the Financial Year 2018/19, the Third Supplementary Estimates facilitates the reallocation of fiscal space to certain areas of the Budget where execution at February 2019 indicated much slower than programmed implementation,” according to JIS.

The Jamaica Information Service (JIS) further indicated that, “The Minister stated that $577 million was earmarked to complete arrears payment to suppliers of goods and services, thereby putting the Tax Administration Jamaica in a position to clear substantial arrears, going into the new financial year. In addition, he noted that an allocation of $1.5 billion within the Capital Estimates is being transferred to increase the Contingency for Natural Disasters/Infrastructure Rehabilitation provision under Head 20000A: Ministry of Finance and the Public Service, to $2 billion, up from the $500 million approved in fiscal year 2018/19.”