For the period of April 2021 to March 2022, the GOJ reported Total Revenues & Grants of $716.90 billion, $523.20 million less than the Government’s projection. This represented an increase of approximately 25% relative to the $575.40 billion recorded for the corresponding period in 2021. ‘Non-Tax Revenue’, ‘Capital Revenue’ and ‘Grants’ underperformed projections during the review period. ‘Non-Tax Revenue’ amounted to $92.83 billion during the review period, ‘Capital Revenue’ ended at $908.40 million, while ‘Grants’ closed the period at $7.66 billion, $3.15 billion less than the budgeted amount. ‘Tax Revenue’ of $613.04 billion was reported which was 1.1% higher than the budgeted amount. Notably ‘Bauxite Levy’ amounted to $2.46 billion, $306.30 million more than the budgeted amount. 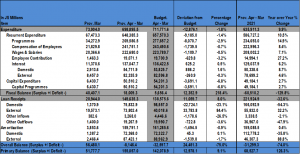