Government Operations Results for May 2018

Government Operations Results for May 2018

For the period of April 2018 to May 2018, the GOJ reported Total Revenues & Grants of $84.59 billion, $472.7 million more than the Government’s projection. Furthermore, year over year, this represents an increase of approximately 11% relative to the $76.18 billion recorded for the corresponding period in 2017. ‘Tax Revenue’ and ‘Capital Revenue’ outperformed projections while ‘Non-Tax Revenues’ and ‘Grants’ underperformed projections during the review period. ‘Tax Revenue’ amounted to $78.66 billion, $947 million more than budgeted while ‘Capital Revenue’ of $161.8 million was reported; $1.1 million more than budgeted. ‘Grants’ underperformed budget by $332.1 million, amounting to $808.0 million during the review period while ‘Non-Tax Revenue’ totalled $4.97 billion, $143.4 million or 2.8% less than budgeted. Notably, no provisional amount was booked for ‘Bauxite Levy’ for the review period. 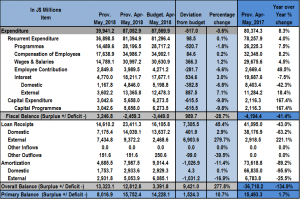 As part of the Memorandum of Economic and Financial Policies (MEFP), the GOJ estimates that the primary balance, as a performance criterion, should amount to $141.1 billion by the end of the 2018/2019 fiscal year. For the June quarter, a primary balance of $18.0 billion is estimated. As at the end of May 2018, this amounted to $15.75 billion. Tax Revenue is expected to total an estimated $110.0 billion by the end of the June quarter. The reported tax revenue for the end of May 2018 was $78.66 billion.