For the period of April to November 2019, the GOJ reported Total Revenues & Grants of $404.96 billion, $4.84 billion more than the Government’s projection. Furthermore, year over year, this represents an increase of approximately 25.2% relative to the $323.55 billion recorded for the corresponding period in 2018. ‘Tax Revenue’, ‘Non-Tax Revenue’ and ‘Capital Revenues’ outperformed projections during the review period. While, ‘Grants’ underperformed projections during the period. ‘Tax Revenue’ amounted to $361.11 billion, $5.05 billion more than budgeted while ‘Non-Tax Revenue’ of $39.65 billion was reported; $63 million more than budgeted. Whereas, ‘Capital Revenues’ totalled $826.3 million, $13 million or 1.6% more than budgeted. ‘Grants’ underperformed the budget by $301.9 million, amounting to $3.36 billion during the review period.  Notably, no provisional amount was booked for ‘Bauxite Levy’ for the review period.

As a result of the decrease in Expenditures for the period April to November 2019, the ‘Fiscal Surplus’ was $11.43 billion, relative to a projected deficit of $5.52 billion. Additionally, the primary balance for the period amounted to $94.07 billion, 17.7% more than budgeted. 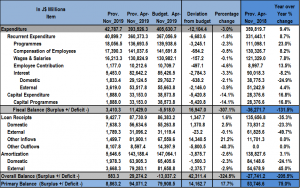 The country completed its 36-month Stand-By Arrangement with the IMF on November 10, 2019.  The IMF noted that the country stuck to the reforms implemented, reduced public debt and is on track to meet “the legislated target of 60 percent of GDP by March 2026.”  The country accessed approximately US$1.65 billion of SDR over the period.

In total, the country spent roughly 6 ½ years being supported by the IMF over two successive arrangements.  Though growth has been low over this period, the IMF noted that other indicators such as “unemployment is at a historic low, credit recovery is gaining force on the back of substantial monetary easing, FX reserves are comfortable, and inflation is subdued.”