As a result of the increase in Expenditures for the period April 2018- October 2018, the ‘Fiscal Surplus’ was $1.28 billion, relative to a projected deficit of $10.33 billion. Additionally, the primary balance for the period amounted to $78.79 billion, 14.1% more than budgeted. 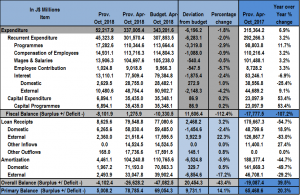 As part of the Memorandum of Economic and Financial Policies (MEFP), the GOJ estimates that the primary balance, as a performance criterion, should amount to $141.1 billion by the end of the 2018/2019 fiscal year. For the September quarter, a primary balance of $44.0 billion was estimated. As at the end of October 2018, this amounted to $78.79 billion. Tax Revenue was expected to total an estimated $234.0 billion by the end of the September quarter. The reported tax revenue for the end of October 2018 was $300.19 billion. 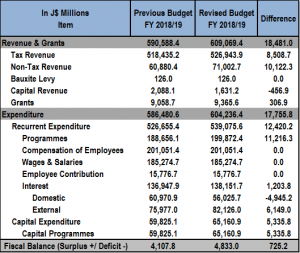 The main capital project performing above estimate is “the Major Infrastructure Development Programme (MIDP) under which major improvements are being implemented along the Mandela Highway, Constant Spring Road and Hagley Park Road.”  It was further noted that “Over the fiscal year to date a number of critical expenditure pressures have emerged that have necessitated a revision of the FY 2018/19 Budget resulting in net additional expenditure of $17.4 billion.”

Although Expenditure was $4.32 billion below target, the significant factors that led to a supplementary budget were:

Non-Debt Expenditure is expected to rise by $16.6 billion due to the ‘Street Lighting Arrears and Current Payments’ due to Jamaica Public Service (JPS) by the Local Government. This increasing arrears for street lighting have translated into significant and growing areas due to Petrojam by the JPS. Additionally, the non-payment to Petrojam is impacting the Company’s capability to pay its tax obligations and other expenses which forces the Company to obtain additional financing to facilitate its operations.

With regards to the Major Infrastructure Development Programme (MIDP), adjustment in the provision to align expenditure with the increased pace of execution; that is the major improvements that are being undertaken in the Kingston Metropolitan Area that needs to be completed within the shortest possible time, led to $7.34 billion being accommodated in the Supplementary Estimates.

Debt service is estimated to increase to $289.9 billion.  As indicated by Dr. Nigel Clarke, “Debt Service is estimated to increase due to external payments and arises as a result of the increase in the applicable exchange rate of the Jamaica Dollar to the United States Dollar. The negative impact of the exchange rate is to some extent offset by the impact of lower domestic Treasury Bill rates.”