For the period of April to September 2019, the GOJ reported Total Revenues & Grants of $313.95 billion, $3.58 billion more than the Government’s projection. Furthermore, year over year, this represents an increase of approximately 9.6% relative to the $286.46 billion recorded for the corresponding period in 2018. ‘Tax Revenue’, ‘Non-Tax Revenue’, ‘Grants’ and ‘Capital Revenues’ outperformed projections during the review period. ‘Tax Revenue’ amounted to $276.42 billion, $1.88 billion more than budgeted while ‘Non-Tax Revenue’ of $33.58 billion was reported; $1.46 billion more than budgeted. ‘Grants’ outperformed the budget by $227.1 million, amounting to $3.12 billion during the review period. Whereas, ‘Capital Revenues totalled $826.3 million, $13 million or 1.6% more than budgeted. Notably, no provisional amount was booked for ‘Bauxite Levy’ for the review period.

As a result of the decrease in Expenditures for the period April to September 2019, the ‘Fiscal Surplus’ was $14.40 billion, relative to a projected surplus of $6.14 billion. Additionally, the primary balance for the period amounted to $80.67 billion, 7.5% more than budgeted. 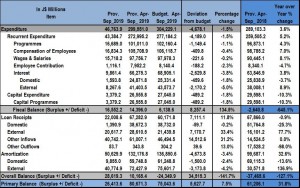 As part of the Memorandum of Economic and Financial Policies (MEFP), the GOJ estimates that the primary balance, as a performance criterion, should amount to $140.01 billion by the end of the 2019/2020 fiscal year. Up to the September quarter, a primary balance of $35.70 billion is estimated. As at the end of September 2019, this amounted to $80.67 billion. Tax Revenue is expected to total an estimated $242 billion by the end of the September quarter. The reported tax revenue for the end of September 2019 was $276.42 billion. 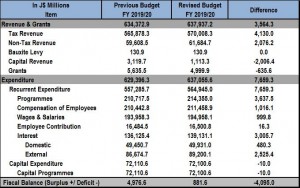 YTD, the government for the most part has outperformed its targeted revenue while keeping most expenditure line items below budget.

However, the emergence of additional expenditure requirements since the approval of the budget in March 2019 has necessitated the formulation of a supplementary budget. According to the Ministry of Finance, “The First Supplementary Budget for FY 2019/20 is developed against the backdrop of continued positive performance in total revenue, evidenced by the better-than-budgeted Tax Revenue collections for the April to July period of the fiscal year.”

Although Expenditure was $4.68 billion below target, the significant factors that led to a supplementary budget were:

With regards to the Major Infrastructure Development Programme (MIDP), another $5 billion has been allocated to fund, among other things, corrective work for residents whose homes were impacted by the roadworks in St James and Westmoreland.

The MIDP, which includes the upgrading and expansion of major roadways across the island, is being funded through a loan from the Exim Bank of China and the Jamaican Government.

Debt service is estimated to increase to $45.50 billion.  As indicated by the Ministry of Finance, “this comprises $40,205.0mn in amortization and $5,295.4mn in interest payments. The increase in Public Debt Service reflects the impact of recent liability management activities.”

According to the Government, “The medium-term fiscal profile reflects updated projections that are consistent with the adjustments to the medium-term macroeconomic outlook as well as with the fiscal policy priorities of the GOJ.”