As for information services, there was a 6.8 percent increase relative to a decrease of 0.2 percent. The first quarter growth was as a result of increases to both broadcasting and telecommunications and the publishing industry.

While, non-durable goods manufacturing increased by 3.8 percent subsequent to a 3.1 percent increase. As the first quarter reflected increases in petroleum and coal products, as well as food, beverage and tobacco products. 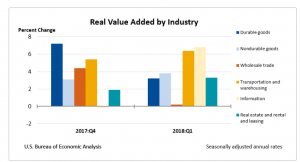 “Overall, 13 of 22 industry groups contributed to the increase in real gross output.”

There was an increase in the economy-wide, real gross output of 2.7 percent in the first quarter. Thus, reflecting increases of 3.2 percent, 3 percent and 0.3 percent for the private goods-producing sector, private services-producing sector and the government sector, respectively.

Durable goods increased 2.8 percent which was primarily resulted from motor vehicles, bodies and trailers and parts manufacturing. Transportation and warehousing was the largest increase since the fourth quarter of 2014 indicating a 7.2 percent increase. This primarily reflected increases in air and truck transportation.

Notably, the information services industry has increased for seven consecutive quarters with a current increase of 7.2 percent, after increasing by 4.2 percent. 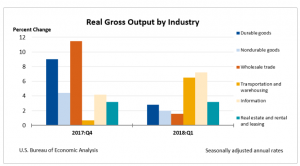