Real GDP in the 3rd quarter of 2018 increased for 49 states and the District of Columbia. According to the U.S. Bureau of Economic Analysis (BEA), “The percent change in real GDP in the third quarter ranged from 5.8 percent in Washington to 0.0 percent in West Virginia.” 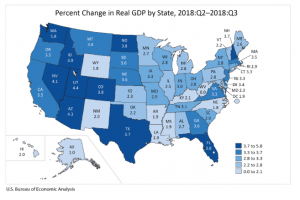