Cost of sales amounted to a total of $31.33 million relative to the $12.16 million reported for the same period last year. For the quarter, cost of sales increase from $4.81 million to $9.64 million.

Consequently, gross profit increased 19% or $9.32 million to a total of $58.75 million relative to the $49.43 million for the corresponding period in 2017. There was a 35% growth in gross profit for the third quarter to amount to $22.74 million compared to $16.85 million the prior year. The company highlighted that “ these expenses as well as administrative expenses increased during the period under review as we prepared our facilities to more efficiently provide 24-hour urgent care services, increased lab services and build-out our staff complement to better serve our customers. ”

Other operating expenses amounted to $1.88 million, down from $28.06 million in the corresponding period for 2017. Finance cost for the period amounted to $26.24 million relative to $28.43 million booked in for the comparable period in 2017.

GWEST stated, “We continue to work closely with the Ministry of Health (MOH) and the National Public Health Laboratory (NPHL) to finalize registrations that will allow us to accept health insurance cards as payment for urgent care and laboratory services. With this added payment method, we anticipate a significant increase in revenues. Our customers will be able, then, to access our services using through their health insurance provider. The first step in this process has been completed with the inspection by the MOH of our Urgent Care and Lab during the quarter and we now await the MOH’s formal registration letters to complete the process.”

Also, “In keeping with our business strategy, the company is increasing productivity and operating efficiently to enhance profitability. We have signed contracts with hotels and businesses in the Montego Bay area and continue to aggressively seek to sign new contracts with other medical service providers who are owners and tenants in the GWest Centre building that allow, the Company to market a : “one-stop” health care facility to customers. These contractual agreements will contribute to increased revenues in the near future.” 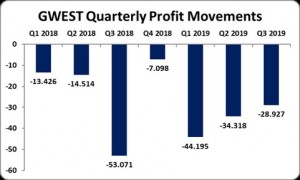