GWEST Corporation Limited, for the three months ended June 30, 2022, booked total revenue amounting to $43.41 million, an increase of 44% when compared with the $30.80 million booked last year. Management noted that revenue was mainly impacted by a 77% increase in patient fees during the quarter, which was mainly due to increase business activity and opening of the surgery Centre Facilities.

Additionally, “rental and lease income increased by 21% over the corresponding quarter in the prior year this increase due to increase lease of space.”

Direct Cost for the period remained at $8.84 million year over year. Consequently, gross profit increased 63% amounting to $34.57 million relative to the $21.24 million for the corresponding period in 2021.

As a result, operating loss closed the period at $2.29 million versus a loss of $1.29 million booked twelve months earlier. 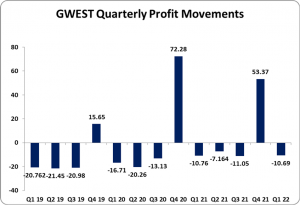