GWEST Corporation Limited (GWEST), for the nine months ended December 31, 2020 booked Total revenue of $87.32 million, a decrease of 14% when compared with the $101.83 million booked last year. Revenue declined by 1% or $413,000 for the third quarter, amounting to $32.51 million (2019: $32.92 million). The company highlighted that “Revenues from leases increased quarter over quarter, but revenue from patient fees continue to underperform due to the reduction in economic  and business activity brought on by the onset of the Covid-19 pandemic.”

GWEST stated, “During the quarter we started construction of our Ambulatory Surgical Centre and overnight inpatient Unit. This is projected to become operational by the second quarter of the next financial year and will result in increased revenues for our company.” Also, “We continue to see increase enquires for our investments property and we expected to see improvement in the occupancy levels in the upcoming periods.” 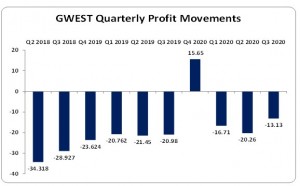