GWEST Corporation Limited (GWEST), for the six months ended September 2020 reported revenue of $54.83 million, a decrease of 20%, when compared with the $54.83 million booked last year. Revenue for the quarter totalled $30.98 million down 12% year over year (2019: $35.41 million). The company noted, “our reductio in revenue is mainly attributable to less client visits to the GWest facility brough on by the restriction of movements and the socio-economic decline caused by the battle against the COVID-19 pandemeic.”

Administrative expenses closed the period at $64.40 million versus $68.33 million in the previous corresponding period, while other operating expenses reported nil (2019: $406,000).

Gwest explained that the reduction in operating expense was, “mainly as a result of the reduced operating hours and other cost containment measures to mitigate the impact of the COVID-19 pandemic.” 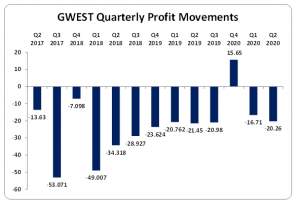