GWEST Corporation Limited (GWEST), for the six months ended September 30, 2021 reported revenue of $72.96 million, an increase of 33%, when compared with the $54.83 million booked last year. Revenue for the quarter totalled $41.97 million up 35% year over year (2020: $30.98 million). The company noted, “during the period we completed the build out of our surgery centre and overnight in-patient facility, which is expected to become operational within the third quarter of our financial year.”

Administrative expenses closed the period at $21.26 million versus $22.54 million in the previous corresponding period. Other operating expenses amounted to $39.29 million (2020: $41.86 million).

As a result, GWEST reported loss before taxation of $18.10 million relative to the $36.97 million reported in 2020. Pretax loss for the second quarter totalled $7.16 million versus a loss of $20.26 million booked for the comparable quarter of 2020.

GWEST noted, “our outlook for the coming quarters remain positive as there are signs that there will be further opening up of the economy and a rebound of both stopover tourism and cruise tourism. We have seen increased enquires in our investment properties and we expect to see improvement in the occupancy level in the upcoming periods.” 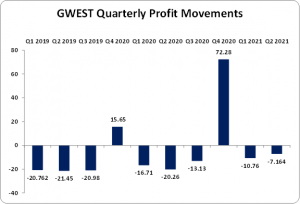