Higher Interest Rates Could Weigh on Banks’ Net Worth

Though higher interest rates are likely to boost banks’ net interest revenue in the short term, they may have a negative impact on their net worth in the medium term.

In general, banks in the euro region have a positive duration gap, which means that if interest rates rise, assets will lose more value than liabilities, lowering the banks’ economic worth of equity. After decreasing in 2020, the duration gap began to widen again in the first quarter of 2021, indicating that banks were returning to pre-pandemic levels of interest rate risk. Over time, derivatives have played an offsetting function meaning banks’ non-derivative interest rate risk (IRR) exposure has been somewhat offset by their derivative positions on a whole.

The duration gap can be expressed as the sensitivity of a bank’s economic worth to interest rate changes. For example, a 200-basis-point steepening of the yield curve at the longer end in the fourth quarter of 2021, would have lowered banks’ aggregate net worth by about 4% of Common Equity Tier 1 (CET1) capital (see charts below). In this scenario, the net worth of more than 60% of the banks studied would decrease, while the net worth of 25% of the banks would decrease by more than 7% of CET1 capital. This decline occurs because banks would have to pay greater funding costs in the medium to long term to cover historical low-yielding assets. Changes in the economic value of banks’ equity may not translate into accounting losses, but they do shed light on banks’ resilience to changes in interest rates over the long run. 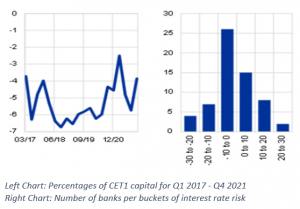 An empirical analysis of bank characteristics and IRR revealed that the share of exposures with longer rate-fixation periods has a significant role in this relationship and shows that derivatives are used to hedge IRR. Additionally, the analysis revealed that the decline in banks’ net worth under a scenario of rising rates is more pronounced when the share of lending with fixation periods greater than ten years is higher. Furthermore, larger banks seem to be facing a reduced loss in net value, which could be due to smaller banks’ limited hedging capacity.