According to the assumptions used in the June 2022 Eurosystem staff macroeconomic estimates, oil prices in US dollars are anticipated to increase by almost 40% between 2022 and 2024 from their pre-COVID levels (2017-19). The rise in oil prices since 2019 is less dramatic, measured in percentage terms, than the shocks of 1973 and 1979. (Chart A). Additionally, it came out that the increase between 2003 and 2008 was of a bigger scale than the current increase. The present oil price increase is more akin to the shocks of the 1970s than to those of the 2000s, when demand for oil was a major factor in the increase in fossil fuel costs. The current oil price increase is mostly a supply shock tied to supply bottlenecks and the war in Ukraine. Since supply-side considerations are reflected in the present rise in energy prices, and oil prices, it is possible that it will also have an impact on potential output and the output gap, which could have an impact on inflationary pressures. 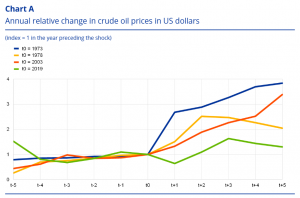 According to economic theory, each of the factors that determine potential output can be negatively associated with changes in the permanent oil price under specific circumstances. Two opposing effects have the most impact on the capital stock. First, the price of oil itself, as an input into production, can be considered a part of the user cost of capital and may have an impact on investment choices. Second, the price of oil is inversely connected with the capital stock’s level of utilization and, consequently, with the rate of depreciation. Overall, there is a negative relationship between oil prices and the existing capital stock and consequently potential output in both scenarios if the elasticity of substitution between oil and the other intermediate inputs is greater than one. Since higher oil prices cause oil-intensive production technology to become obsolete and thus limit the value added from production, an increase in the price of oil lowers total factor productivity. Additionally, greater transportation costs because of rising oil prices may make specialization less attractive, which would result in slower productivity development.

Since the 1970s, shocks to the price of oil have become less significant as a source of economic fluctuations. At the time of the first oil price shock in 1973, it took about one barrel of oil to produce USD 1,000 of GDP at today’s values. To produce the same level of output today, less than half that quantity of oil is required. Given the lower dependence on fossil fuels in the economies of the euro area, this decline has likely been much greater in those countries.

Given the present increase in oil prices, it is possible to anticipate that the euro area’s potential output will decline by about 0.8% over the next few years. This represents a relatively small shock that should be considered in light of the potential production growth that the European Commission projects will total roughly 5.2% over the following four years.

However, the magnitude of the shock is based on futures prices for the period 2022 to 2024, which can be very volatile. Current technological and economic conditions differ considerably from those prevailing during earlier oil price shocks. This may mean that production technology can adjust more quickly to the change in input prices.