Management noted, “This strong revenue growth was attributable to increased physical capacity at the Kingston location and the opening of our Montego Bay branch during the year.”

Additionally, Management highlighted, “, the company performed an assessment of its receivables and increased its credit loss provisions by $8.3 million, which was recorded in the fourth quarter.”

iCreate noted, “Notwithstanding the overall performance in 2019, the company’s significant capital investment in training equipment and physical capacity in 2019 has positioned the company for growth in revenue and profitability in the coming years. The outlook for iCreate is positive, we made some bold decisions in 2019, including the decision to increase our provision for credit losses. With our infrastructure now at 100% completion, we expect a positive return on investment as we strategically increase market penetration, diversify our product offerings, and create key partnerships.

Management outlook highlighted that, “Montego Bay continues to show good signs of growth and we have also expanded into Trinidad and Tobago which started recording revenues in just one month of launch.” 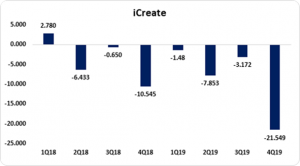